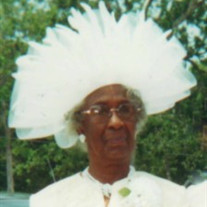 Mrs. Sarah B. Rutherford entered eternal life on Tuesday, May 23, 2017 at Kershaw Health Hospital in Camden, South Carolina. Born July 3, 1918 to the late Hattie B. Williams. Mrs. Rutherford received her early Christian experience at a family church called "Little Zion". She later joined Hyco Missionary Baptist Church in Cassatt, South Carolina. She served as a Missionary, a member of the choir, as well as a Deaconess. Mrs. Rutherford was also an Eastern Star and known throughout her community for feeding and clothing those who were in need. She loved the Lord and served wherever she was needed. Mrs. Rutherford was a life time resident of Kershaw County. She received her education from the Kershaw County Public School District. She was married to the late Deacon Roosevelt Rutherford Sr. From this union, nine children were born. She was preceded in death by a son, Roosevelt Rutherford Jr. and a daughter, Sarah L. McLeod. Left to cherish her fond memories are a son, Willie J. Rutherford of Cassatt, SC. Daughters, Daisy Mae Rutherford of Cassatt, SC, Earline Frierson of Cassatt, SC, Dorothy E. Rutherford of Paterson, NJ, Martha Faye Rutherford of Brooklyn, NY, Joan Dunham (Leander) of Bethune, SC, and Hattie D. Hampton (Clarence Sr.) of Camden, SC. One brother, James Williams of Camden, SC and one sister, Maggie Fowler of Camden, SC. Twenty-Three Grandchildren, Fifty-Four Great-Grandchildren, Twenty-three Great-Great Grandchildren, and Five Great-Great-Great Grandchildren. A host of Nieces, Nephews, Cousins, and Friends. A true matriarch that will be sorely missed by her family and those who knew and loved her.

The family of Sarah B. Rutherford created this Life Tributes page to make it easy to share your memories.

Mrs. Sarah B. Rutherford entered eternal life on Tuesday, May...

Send flowers to the Rutherford family.