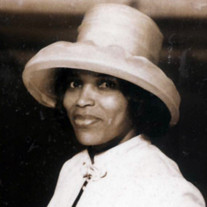 Sister Ruth Clyburn Stanley entered into eternal rest to be with the Lord whom she loved and worshipped daily on Sunday, July 24, 2016 after an extended illness. Sister Stanley was born on May 7, 1925 in Kershaw County. She was born to her parents, the late Mr. Charlie and Mrs. Hettie Clyburn. After completion of her public school education, Ruth and her husband, the late Mr. Bennie Stanley, Sr. moved to New York with their sons. After working in New York for several years and retiring, she decided to move back to her hometown of Camden, South Carolina. Sister Ruth Stanley was reared in a devoted Christian home. She was baptized at an early age and became a member of the St. John Baptist Church. Upon returning home, Sister Stanley reinstated her membership where she had attended as a child until adulthood. She was affectionately called Ms. Ruth or Sister Ruth by several church members. She loved and always had her purse filled with “mint candy” every Sunday morning to happily share with the children and adults of the church. She loved her church and was a very active and an involved member. Sister Ruth was a member of the Senior Choir and enjoyed leading at times. One of her favorite songs to sing was “God Has Smiled on Me!” She was a member of the Missionary Society Ministry serving on Team #1, an active participant in Sunday School classes and served on the Kitchen Committee. Sister Stanley was also a strong financial supporter of her church. Sister Ruth C. Stanley was preceded in death by her parents, Mr. Charlie and Mrs. Hettie Clyburn; son, Jerry Stanley; Brother and Sister –in-law, Deacon James E. Clyburn, Sr. and Sister Lessie P. Clyburn; Brother, Mr. Clifford Clyburn; Sister and Brother-in-law, Mrs. Esther Clyburn Seabrooks and Mr. Robert Seabrooks, Sr.; Brothers in-law, Mr. Kelly Young, Sr.; Mr. Norris Alexander; Mr. Pete Kershaw and Mr. Charlie Allen. Those who left to forever cherish her memories are; sons, Bennie Stanley, Jr. of Dorchester, Massachusetts and Jessie (Tracey) Stanley of Bethlehem, Pennsylvania; Eight Grandchildren and two Great-Grand Children; brothers and sisters: Deacon Clyde (Willie Mae) Clyburn and Mr. Wilson (Dorothy) Clyburn all of Camden, S.C.; Mrs. Naomi Kershaw, Mr. Charlie Clyburn, Jr.; Mrs. Dorothy Bell Alexander all of Youngstown, Ohio; Mrs. Willie Mae Allen of Mattapan, Massachusetts; Mrs. Louise Webb of Atlanta, Georgia, Mrs. Viva Lee (James) Baker of Brooklyn, New York and Mr. William (Beverly) Clyburn of Aiken, South Carolina; one sister-in-law, Mrs. Dorothy Clyburn of Brooklyn, New York and several nieces, nephews, great nieces, great nephews and cousins.

Sister Ruth Clyburn Stanley entered into eternal rest to be with the Lord whom she loved and worshipped daily on Sunday, July 24, 2016 after an extended illness. Sister Stanley was born on May 7, 1925 in Kershaw County. She was born to her parents,... View Obituary & Service Information

The family of Ruth Stanley created this Life Tributes page to make it easy to share your memories.

Sister Ruth Clyburn Stanley entered into eternal rest to be with...

Send flowers to the Stanley family.