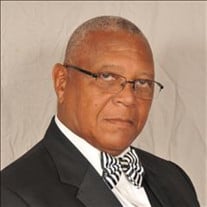 Reese Edward Brown went home to be with the Lord on Saturday, October 5th, 2019, at Prisma Health Richland Hospital in Columbia, South Carolina. He was the son of the late James Preston Brown and Bertha Thompson Brown, born January 15, 1949... View Obituary & Service Information

The family of Reese Brown created this Life Tributes page to make it easy to share your memories.

Reese Edward Brown went home to be with the Lord on Saturday,...

Send flowers to the Brown family.