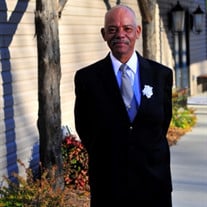 MALACHI H. SANDERS was born on April 27th, 1958, to the late Thomas Sanders Sr. and Ruth Sanders in Rembert, South Carolina. He attended school in Sumter County and graduated from Hillcrest High School's class of 1976. He was baptized at an early age. Malachi was Employed for 40 plus years at Thermoid, Inc located in Elgin, SC until retiring in 2015. Malachi was a devoted husband, father, and grandfather. At an early age, he developed a love for drag racing and working on cars. He shared those memories with his closest friends and family. During his retirement, he enjoyed sitting in his rocking chair with his wife right at his side, playing with his dog cookie, grilling, and being outdoors. Family was his number one priority, and he would always make sure that his family was provided for. Malachi was willing to help anyone. Malachi had an outspoken spirt and a giving heart and for that he will be dearly missed. Our love for him will endure forever and we take comfort in knowing he is in God’s loving arms. He leaves to cherish his memory, his Loving Wife, Bessie Sanders; his mother Ruth Sanders; his loving two daughters, Melissa (Russell) Gaither of Dalzell, SC and Nicquan (Tyrone) Legette of Harrisburg, NC; Grandchildren, Khyrin, Saravia, Siera, Skyla, Taylor, Russean, and Kemaryae; Stepchildren, Thomas Drakeford, Barbara Walker, Valerie Cook, Morris Drakeford; 12 Step Grandchildren; siblings, Alverita (Mark) Peeples of Harrisburg, NC, Frank Sanders of Rembert, SC, Cherry (Gene) McCall of Springfield, VA, Claude (Doris) Sanders of Glendale, MD, Phriscillia (Charles) Marsh of Concord, NC, Jackson (Margaret)Sanders of Rembert, SC, Bobby Sanders of Rembert, SC, and Stene Johnson of Washington, DC; a host of aunts, nieces, nephews, cousins, and in-laws. Malachi was preceded in death by his father, Thomas Sanders Sr; brothers, Thomas Sanders Jr. and Raymond Sanders.

MALACHI H. SANDERS was born on April 27th, 1958, to the late Thomas Sanders Sr. and Ruth Sanders in Rembert, South Carolina. He attended school in Sumter County and graduated from Hillcrest High School's class of 1976. He was baptized at an... View Obituary & Service Information

The family of Malachi Hosea Sanders created this Life Tributes page to make it easy to share your memories.

Send flowers to the Sanders family.