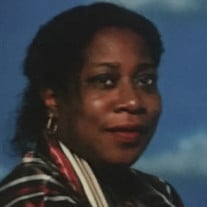 Funeral services will take place Sunday, August 15, 2021 at 1 PM at Collins Funeral Home. Ms. Turner will be available for public viewing from 3PM until 5 PM on Saturday, August 14, 2021. June Chisolm Turner, also known as J.T. Nips, was born October 17, 1960 in Brooklyn, New York. She was the youngest of three children born to the late Joseph and Henrietta Boyd Chisolm. She attended Brooklyn public schools and was bused to a white middle-class neighborhood. J.T. was exposed to a variety of culture and influences. She experienced the culture of the community in which she was educated as well as the poverty, gang violence and drive-by shooting of her local neighborhood. These experiences combined with her introverted personality led to her developing a love for writing and poetic expression. J.T. attended City College, Manhattan College, and Medgar Evers College. She worked in the medical profession for a number of years as a nursing assistant. She would later move to South Carolina to help care for her mother. J.T. had many accomplishments but, two of her greatest loves were her son, James and her daughter, Latefa. Those left to cherish her memory include her children, James and Latefa; five grandchildren; siblings, Joeanne Chisolm of Camden, SC, Joseph Chisolm, Jr (Tamara) of Camden, SC, and Demetrius Hood of Arlington, TX; aunts, uncles, cousins, and friends. In lieu of flowers, contributions can be donated at the link below. https://www.empathy-funding.com/240/53/Turner

The family of June Turner created this Life Tributes page to make it easy to share your memories.

Send flowers to the Turner family.