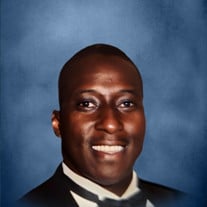 JOHN RAY STOVER, best known as “The Amazing Black Prince,” was born to the late Leola Jones Stover and the late Deacon James Stover on December 6, 1957 in Camden, South Carolina. He entered into eternity on April 16, 2022 in Columbia, South Carolina. John attended school in Kershaw County and graduated from Camden High School. He developed a love for music at an early age. John began playing drums in the seventh grade. In high school, he became a member of the Camden High School Marching Band and would play tenor drum. He also enjoyed all things outdoors. Fishing and hunting were a passion that John shared with his late father. The Black Prince was known as the firecracker and the life of the party. He was involved in his community and was a Lifeguard for N.R. Goodale State Park, a Boy Scout, a member of the Focus Social Club, and one of the Washington Park Boys. John grew up in and continued to support Mt. Zion Baptist Church Kirkwood. After his graduation from high school, he went on to work at Kershaw County Memorial Hospital. He was later employed by and retired from Harwick Chemical as an Environmental Operator from 1985 to 2018. Those that preceded John in death include parents, Leola Jones Stover and James Stover and a sister, Barbara Ann Adamson. Those left to remember and cherish his memory include his daughter, Evita Marie Stover; a loving mother, Betty Woods Stover of Camden, South Carolina; brothers, Edward James Stover (Sevilla Ann Mack-Stover) of Camden, South Carolina, James L. White (Catherine Houston-White) of Charlotte, North Carolina and Kenneth Ricardo Woods of Charleston, South Carolina; two sisters, Shirley Ann Stover-Culberth (Paul Culberth) of Charlotte, North Carolina and Arlene J. Stover-Smith (Kelvin E. Smith) of Charlotte, North Carolina; a host of nieces, nephews, cousins and friends.

JOHN RAY STOVER, best known as &#8220;The Amazing Black Prince,&#8221; was born to the late Leola Jones Stover and the late Deacon James Stover on December 6, 1957 in Camden, South Carolina. He entered into eternity on April 16, 2022 in Columbia,... View Obituary & Service Information

The family of John Ray Stover created this Life Tributes page to make it easy to share your memories.

Send flowers to the Stover family.