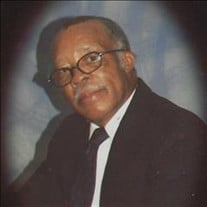 Minister James "Red" Drakeford humbly bowed to God's will and peacefully and quietly entered into eternal rest at his home in Camden, South Carolina on Thursday, August 29, 2019. Born June 4, 1936 in Camden, South Carolina, he was the son of the late John Drakeford and the late Clemmie Anderson Drakeford. He was educated in the Kershaw County public school system and later received his Ministerial Certificate from Morris College in April 2000. Minister Drakeford received his Certificate of License in the gospel ministry September 13, 1992. He was solemnly and publicly set apart and ordained to the work of the gospel ministry by authority of the Mount Moriah Baptist Association September 25, 1994. He served faithfully as the Associate Pastor of both Parker Baptist Church and Macedonia Baptist Church located in Camden, SC. Minister Drakeford was dedicated to the work of the ministry and community service. Minister Drakeford was one of the founding members of the Drakeford Community Park and his love for his family was always evident. Not only did Minister Drakeford lovely father his own children, he freely shared his fatherly wisdom to all he encountered. Minister Drakeford was a faithful member of the Kershaw County Prayer Warriors. Minister Drakeford was employed with DuPont (May Plant) for over twenty-five years from 1965 to 1991. He also worked as an entrepreneur with his lawn care business. He loved farming and gardening. His favorite holiday season was Christmas. Minister Drakeford and his loving wife enjoyed vacationing in Charleston, SC and loved spending time there fishing, going to the beach, sight-seeing and making new friends. One of his favorite specialty stores was the local Goodwill! Minister Drakeford loved life and found great joy in helping others. He leaves to cherish his life and legacy his devoted and loving wife of 60 years, Mrs. Mae Belle Jackson Drakeford. To this union, they had seven children, two of which preceded him in death. Those remaining to honor his memory include three sons: Mr. James Curtis (Kathleen) Drakeford of Camden, SC; Mr. John Patrick (LaShawn) Drakeford of Lancaster, SC; Mr. Alan Drakeford of Jamaica, NY; two daughters, Ms. Teresa Drakeford of Charlotte, NC and Ms. LaShelle D. Peay of Charlotte, NC.; one daughter in-law, Stacey Hubbard Drakeford; brothers Quay (Elizabeth) Drakeford of Camden, SC; Joseph Drakeford of Mount Vernon, NY; sisters, Cornelia Drakeford Marsh of Lancaster, SC and Laura Drakeford (Ernest) Witherspoon of Camden, SC; one brother-in-law, three sister-in-laws; ten grandchildren, eleven great grandchildren, and a host of nieces, nephews, cousins, and friends. He was preceded in death by his daughter, Loretta Drakeford Staley; son, Darren Keith Drakeford; grandson, Jonathan Hubbard; and great grandson, Carson Drakeford.

The family of Minister James Drakeford created this Life Tributes page to make it easy to share your memories.

Minister James &quot;Red&quot; Drakeford humbly bowed to God&#39;s will and...

Send flowers to the Drakeford family.