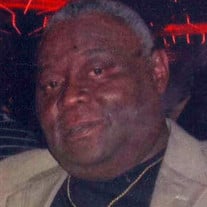 Mr. Gregory Norwood &#8221;Muscle&#8221; Robinson was born August 5, 1954 in Brooklyn, New York. He was the son of the late Ruby Robinson. He entered into eternal rest on Saturday, August 12, 2017 at Kershaw Health in Camden, South Carolina.... View Obituary & Service Information

The family of Gregory Robinson created this Life Tributes page to make it easy to share your memories.

Send flowers to the Robinson family.