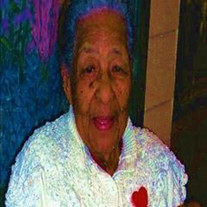 Grace Elvira Hayes- Lawton Harris was born December 12, 1916 in Large, PA to Charles and Melvern Hayes. She loved her brother, Charles Jr. (Buddy) and sister, Edna, who have both passed on. Grace was blessed with 3 loving husbands. She was first married to Frank Lawton who died of lung cancer. Their twin daughters died shortly after they were born, but to our delight, Charlene was born two years later. Grace was married to James Harris for about five years until his death. Mr. Norman Redwing, (Norm) was Graceâ€™s third husband for over two decades. They were inseparable. Grace was affectionately known to her family, friends and caregivers as GG. Surprisingly, GG made bombs during World War II and cleaned homes for a living. GG made the best chocolate chip cookies as well as stuffed cabbage. She loved to paint and wall paper as long as she had a few Fort Pitt or Iron City beers. GG was very creative crocheting many quilts and scarves as well as embroidering for family and friends. Tom Jones was her favorite singer and she faithfully watched his TV show every week. GG sat for hours with word find puzzles as she watched Fox News with Bill Oâ€™ Reilly.GG was known for uttering several phrases such as â€œYa think,â€ â€œJust hangin in,â€ and â€œMy, my, myâ€ with the sweetest facial expressions. God blessed our GG with 102 years, and we thank God for those wonderful years. She is survived by her daughter, Charlene Nelson, three grandchildren: Derek, Renee and Curtis, ten great-grandchildren: Tamika, Angie, Yulanda, Derek, Donovan, Brian, Sean, Theresa, Erica, and Josay and five great- great-grandchildren: Amiyah, Joseph, Christopher, Suniah and Derek. We will miss our G.G. as she went home to be with The Lord on Tuesday, December 18, 2018. favorite_border Donations Pledges

Grace Elvira Hayes- Lawton Harris was born December 12, 1916 in Large, PA to Charles and Melvern Hayes. She loved her brother, Charles Jr. (Buddy) and sister, Edna, who have both passed on. Grace was blessed with 3 loving husbands. She was... View Obituary & Service Information

The family of Grace Elvira Hayes (Harris) Harris created this Life Tributes page to make it easy to share your memories.