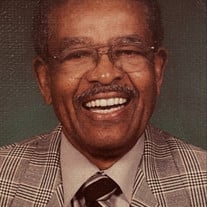 THE BEGINNING George Carl Dudley, affectionately known to high school classmates and hometown friends as "Carl", was born in Dublin, Georgia, June 22, 1942, to M. H. Sr. and Alberta Brown Dudley. He was the fourth of 5 children born that union. George was preceded in death by his parents, his wife of 51 years, Delores Robinson Dudley; one sister, Doris Dudley Washington and one brother, W.H. Dudley. HIS EDUCATIONAL PATH Carl was educated in the public schools of Dublin, Georgia: Telfair Street, Susie Dasher Elementary School and Oconee High School from where he graduated in June of 1960. George's educational path led him to Claflin University in Orangeburg, South Carolina. He was very active in his Mathematics Major Courses and OPERA Singing Minor. He continued his love for music and singing by joining the Claflin University Choir and actively participating for four years. He was also initiated into The Kappa Alpha Psi Fraternity. In June, 1964, he earned his Bachelor of Science Degree in Mathematics and Opera Singing. He also gave Claflin credit for introducing him to the "best thing that ever happened to him" ... his wife, Delores Robinson, whom he met, dated and was married for 51 years. HIS CAREER and SERVICE PATH George began his work career as a Mathematics Teacher at The Burney Harris High School in Athens, Georgia where he taught for two years. From there, he served in the US Army and was honorably discharged. His work experiences continued in Vitro, ICC; at Walter Reed Military Hospital in Washington, DC and the FDIC in Arlington, Virginia until retirement. HIS SPIRITUAL PATH While living in the Maryland/Washington, DC Area, George joined The Albright United Methodist Church. He was an active member of the choir. Upon retirement, he and Delores moved to Lugoff, South Carolina. George joined The Francis Bums United Methodist Church and continued his first love ... singing in the choir. George also continued his service to Claflin University Alumni Association. He served as Treasurer of the National Association for several terms. He continued his support by establishing The George and Delores Endowed Scholarship Fund to ensure that future students would have an opportunity to attend the university. Mr. Dudley remained active and committed to the church and university as long as his health and the COVID-19 Pandemic allowed. HIS FAMILY and LEGACY MEMORY George Carl Dudley leaves to cherish his memory: his loving daughter and caretaker, Kristina Dudley (George) McCane; three grandchildren: Tyrese Neale, Kyra McCane and Joseph McCane; one sister, Mary (Leroy) Spells; one brother, MH (JoAnn) Dudley, Jr.; one honorary sister, Betty Brown Williamson; three sisters-in-law: Patricia Jones, Bernice Robinson, Katie Robinson; nieces and nephews; three Godsons: Wendell Boyd, Jr., Daniel Williams and Martin Williams,II; two Goddaughters: Lora (Michael) Coleman and Shauna (Sheik) Bangura; three special friends: Harold Murray, Johnny (Ruth) Lowe and Wendell (Areva) Boyd, Sr.; a host of cousins, other relatives and friends. Francis Burns United Methodist Church will be live streaming the service for Mr. George Dudley on Saturday, January 15, 2022 at 11 am. To watch: Facebook- type in Francis Burns United Methodist church in the search bar. The page will come up and all they have to do is tap the name to open the page. As soon as the live stream starts, it will be the first video on the page and will say “live” in red. https://www.facebook.com/FrancisBurnsUMC/ YouTube- type in Francis Burns United Methodist Church in the search bar. A purple icon will appear with FBUMC inside. The name attached to the channel will say Adrienne Holland. Tap the icon to open the page and when the live stream starts it will be the first video on the page and will say “live” in red. Sometimes with live streaming there can be connection difficulties causing sound issues and lagging.

THE BEGINNING George Carl Dudley, affectionately known to high school classmates and hometown friends as "Carl", was born in Dublin, Georgia, June 22, 1942, to M. H. Sr. and Alberta Brown Dudley. He was the fourth of 5 children born that union.... View Obituary & Service Information

The family of George Carl Dudley created this Life Tributes page to make it easy to share your memories.

Send flowers to the Dudley family.