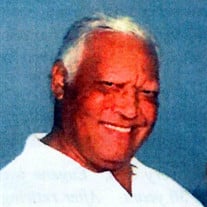 Eugene Paul Williams Sr, age 85, entered into eternal rest on Sunday, October 23, 2016 in Bristow, Virginia. He was the husband of Reola Hodges Williams. They were united in Holy Matrimony on May 7, 1954, and to this union they were blessed with three sons Eugene Paul (Nancy) Williams, Jr., Pernell Jerome (Perrie) Williams, and Joseph Scott (Pamela) Williams, Sr. Born August 22, 1931, in Camden, South Carolina, Eugene Paul Williams, Sr was the son of the late Lee and Rebecca Williams. Two brothers-Pernell Williams and Lee Williams, four sisters Mamie Calloway, Annette Williams, Bernice Williams and Rebecca Preston predeceased him. A resident of Norwalk, Connecticut for 60 years, Eugene was a member of Bethel African Methodist Episcopal Church for more than 50 years. After moving to Northern Virginia, he joined the Gainesville United Methodist Church in 2012. Eugene loved God. He spent countless hours listening and singing along to Gospel music "Spirituals," as he would say. Sundays were his favorite day of the week. He would lay his clothes out Saturday night for Sunday morning Worship Service. A hard worker determined to do his very best, Eugene was employed with Bob Sports, New Canaan, Connecticut for more than 30 years. After retiring from Bob Sports, he worked as a School Crossing Guard. He loved spending time with his family, playing (Trouble) with his Grandchildren and not letting them win. He was a fierce competitor. He would, always have an opinion waiting for anyone and would often be heard saying "The Same," "The Good Master," "That's Right Babe" and "Look In the Mirror." In addition to his wife and three sons, those left to cherish his memory: six grandchildren-Tina Gordon, Eugene P. Williams, III, Joseph S. Williams, II, Gabriel P. Williams, Adam S. Williams, and Kennedy A. Williams; one great grandson Alijah F. Williams; three sisters Thelma Carter of Camden, South Carolina; Natalie Tucker of Norwalk Connecticut and Amelia Young of Woodside, New York; nieces, nephews, a host of other relatives and friends.

Eugene Paul Williams Sr, age 85, entered into eternal rest on Sunday, October 23, 2016 in Bristow, Virginia. He was the husband of Reola Hodges Williams. They were united in Holy Matrimony on May 7, 1954, and to this union they were blessed... View Obituary & Service Information

The family of Eugene Paul Williams, Sr. created this Life Tributes page to make it easy to share your memories.

Send flowers to the Williams, family.