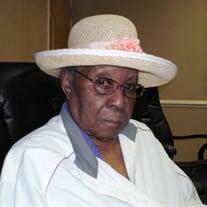 Ella Bell Hunter Boykin, affectionately known as Ella Bell or “Teh Gal,” was born March 1, 1929, to the late Wyatt Hunter and Marie Kirkland Hunter. She departed her earthly home on January 28, 2022. Ella Bell was raised in Borden, South Carolina, and she was educated at Rembert Memorial School in Rembert, South Carolina. She had great love for her family and everyone she encountered; others shared a great love for her as well! She had a beautiful smile and a gift to make people laugh. In 2014, she earned the honor of becoming “Mother of the Church” at her beloved Union Missionary Baptist Church. Mother Boykin worked on her parents’ farm. After her father’s death, she continued to work the farm and she also helped her mother with the younger siblings. As a youth, she played basketball (half-court basketball), but this was not her favorite sport; softball was her favorite sport. At an early age, Mother Boykin accepted and received Jesus Christ as her personal Savior. She was baptized and she became a member of Mt. Pisgah Missionary Baptist Church, Rembert, South Carolina. She moved her membership to Union Missionary Baptist Church, Rembert, South Carolina where she remained a faithful and God-fearing Christian. For many years, Mother Boykin served in several missionary organizations until she decided that it was time to step down. Even after stepping down from her tireless work in the church, Mother Boykin was always willing to help if needed. Organizations she served included the Senior Choir, the Senior Missionary and the Usher Board. Mother Boykin worked as a Domestic Worker for several families for over 53 years. Among them were the Long, Smith and Branham families. She worked consistently for the Longs for 53 years and had a hand in raising their children just like her own: Elizabeth aka Xan, Mary aka Happy, Walter, and Hunter. Mother Boykin enjoyed doing crossword puzzles, and she loved listening to gospel music. Some of her favorite gospel singers were Rance Allen, Luther Barnes and Rev. F.C. Barnes, but her most favorite gospel singer was Lee Williams. She had all of Lee Williams’ DVDs! She often went to bed at night only to have “LEE” sing her to sleep. She loved working outside, especially tending to her flowers and working in her garden. She loved her animals too! The exercise she got from doing these things made her 92 years young and 92 years old. Her grandchildren called her “Grandma Ella Bell” but they also referred to her as “Super Grandma.” With her Coke-Bottle-Shaped figure, Mother Boykin caught the eyes of and eventually married the love of her life, the late Oziah Boykin. To this union, four children were born. In addition to her husband, her son, Oziah Leland Boykin preceded her in death. She was also preceded in death by seven brothers, Harrison, Robert, Wyatt, Henry, Charlie, J.C., and Joseph Hunter; three sisters, Carolyn Grant, Marie Felder, and Mary McCleese; one granddaughter, Katrice Gardner; one great grandson, John Wesley Lee III, and one Son-in-Law, Larry Holmes. She leaves to cherish her fond memories, three daughters, Barbara Ann (Rev. John) Lee, Juanita Harriet (Chief Deputy Hampton) Gardner and Ella Ophelia Holmes; two brothers, Mack (Irene) Hunter and Anthony (Brigitte) Hunter; two sisters-in-law, Marie Smith and Francena Boykin; one Aunt, Bernice Dinkins; eleven grandchildren; seventeen great grandchildren and a host of other relatives and friends, and many that she referred to as her sons and daughters. “Nothing is more beautiful than a woman who is brave, strong and emboldened because of who Christ is in her.” Mother Boykin was a Virtuous Woman, she was brave and bold, and she was embodied in Christ. “Her price is far above rubies.”

The family of Ella Bell Boykin created this Life Tributes page to make it easy to share your memories.

Send flowers to the Boykin family.