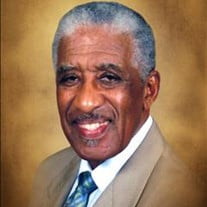 Carl Nathan Robinson, Sr. was born in Orangeburg County October 4, 1937 to Dewitt T. and Edith V. Robinson. He married Mollye L. Alford June 17, 1961 and remained married for fifty-seven years. His favorite story to tell was how they met. When Mollye moved next door to him her landlady walked her over to meet a very nice young man. And the rest is history. Another favorite story he loved to tell was how smart his first class was. He was only nineteen years old but felt very prepared. However, those students were really a challenge and a joy to teach.Carl was born in Orangeburg but grew up in Batesburg, South Carolina. His dad was his principal all of his preparatory years. His mom was his third grade teacher.He began his career in the Kershaw County School System teaching English and Social Studies at Jackson Elementary, Jackson Junior High, Camden Middle; Assistant Principal at Jackson Junior High; Principal at Bethune Elementary and Blaney Elementary.The year hurricane Hugo came through, his mother was living with us and our daughter Melanie was a freshman in college. Because Blaney Elementary School was a shelter, as principal, he had to spend the night there. The rest of us stayed home. That experience influenced his decision to retire at fifty-two years old after thirty-two years in the public school system. Formal education includes Twin City Elementary and High School, Voorhees Junior College, St. Augustine College, South Carolina State College, Indiana University, and University of South Carolina.He dearly loved his church. He would sometimes just ride through the campus to see it and would stay after an event or meeting any time necessary. His affiliations in the church included Lay Leader for three pastors, Pastor Staff Relations Committee, United Methodist Men, Camden First Choir, Finance Steward and committee, and church school superintendent. He was named Father of The Church just last year, an honor he felt so undeserving. He knew his declining health was not going to allow him to really function strongly for long. He was named Father of the Year also.He remained active in the community until his health slowed him down. His affiliations included:Cassatt Water BoardChairperson of Kershaw County Election CommissionFood for the Soul BoardTrinity Apartments BoardCamden First CDCRetired Educators AssociationReader in the First Steps ProgramOmega Psi Phi FraternityChairperson of Administrative BoardBoard of Directors for the AdvocateKershaw County School Strategic Plan 2000Camden Archives and Museum CommissionWateree Community Actions BoardCarl was recognize with many certificates, plaques, letters of commendation, for his efforts in the community, school, and church.His memory is embellished on the hearts of all of his family and friends, especially his wife Mollye; sons Carl Jr. (Valerie) of Blythewood, SC; Anthony (LaToya) of Varnville, SC; daughter Melanie of Columbia, SC; twin sister Carol R. Fleming of Charlottesville, VA; sister Juanita Adams of Newark, NJ; sister-in law Quin Jones of Conway, SC; brothers-in law Emerson L. Alford (Ursula) of Conway, SC and Chester (Victoria) of El Paso, Texas; eleven grands; three step grands; four great grands; five step great grands; many nieces, nephews, cousins and friends. In lieu of flowers, the family requests that memorial contributions be made to Camden First UMC, South Carolina Oncology Associates (SCOA) Cares Foundation or the American Lung Association. favorite_border Donations Pledges

The family of Carl Robinson, Sr created this Life Tributes page to make it easy to share your memories.

Send flowers to the Robinson, family.