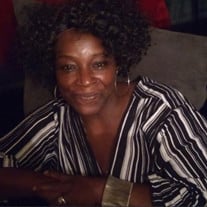 Blanche Greene departed this earth to be with the Lord on Saturday , January 2, 2021. She was born on August 6, 1961 in Camden, South Carolina to Mary Drakeford and the late Bennie Drakeford Sr. Blanche attended and graduated North Central... View Obituary & Service Information

The family of Blanche Geneva Greene created this Life Tributes page to make it easy to share your memories.

Blanche Greene departed this earth to be with the Lord on Saturday...

Send flowers to the Greene family.