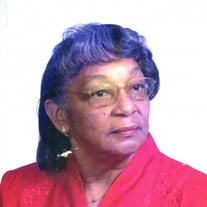 Mrs. Annie B Burgess Cunningham was born April 24, 1945 in Mayesville, South Carolina to the late John and Anna Burgess. Mrs. Cunningham peacefully departed this life, surrounded by her family, on Tuesday October 19, 2021 at Providence Hospital-MUSC Health Columbia Medical Center Downtown. She received her education in the Sumter County public schools of South Carolina and graduated from Ebenezer High School Class of 1964. Prior to her illness, she was an active and faithful member of Good Hope Wesley Chapel United Methodist Church in Camden South Carolina. She served as President of the Usher Board for a period of time. She was employed by Jubilee Embroidery Manufacturing Company and retired after more than 20 years of service. She enjoyed sewing, feeding birds and nourishing her flowers in her spare time. Annie loved and cherished her family. She leaves to cherish her memories: her husband of 54 years, Willie Cunningham, one son, Willie J. Cunningham (Maya) of Atlanta GA, one daughter, Calpurnia Cunningham of Lugoff SC; three sisters, Inez Kennedy of Dalzell SC, Bessie Burgess of Sumter SC, Clara Baker (Moses) of Indian Head, MD; three granddaughters, Angela (Denis), twins Rodrika and Roderica; one sister-in-law Sarah Robertson of Lugoff SC; two aunts, Bertha Dinkins of Rembert SC and Margaret Williams of Sumter SC; and a special nephew, Ronald Burgess (Missy); Meriden, CT and a host of other nieces and nephews, relatives and friends who admired and loved her dearly. She was preceded in death by her parents and two brothers, John Burgess Jr., and James Burgess.

The family of Annie B Cunningham created this Life Tributes page to make it easy to share your memories.

Send flowers to the Cunningham family.