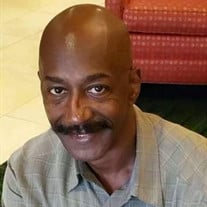 Amen Al-Azar El, 62, entered into God's loving arms on Tuesday, November 7, 2017 in Columbia, South Carolina. Mr. El was born March 15, 1955 in Camden, South Carolina to Lucille Lee and Frank Perkins. He married Marion Picket on December 6, 2010. Amen was a walking encyclopedia. Full of knowledge and wisdom. He found words to be a door to inner energies and expressions. He loved to write and research esoteric material. He was well versed in all religions and subjects from Moorish Science to Freemasonry; from Christianity to Buddhism. A conversation with Amen was equivalent to being in a classroom with a professor. He believe in a Supreme Being regardless of spiritual views. He is the author of "The Passion and Resurrection of Moorish Hiram. Mr. El held a master degree in Business Management. He was employed at various facilities in New Jersey as a Licensed Drug and Alcohol Counselor for over 15 years. Mr. Amen loved photography. He had the vision to look deep into nature and the soul of all living entities. He always saw the positive side of people. He loved to interact and communicate with family and friends on all subjects. He uplifted and encouraged everyone he met, "We all Kings and Queens." Amen had one daughter, Tempess Ward who was the sunshine of his life; granddaughter, Jaleni Ward and one grandson, Ryan Ward. He had the honor of being in the lives of Shonda Ward and Laura (Shaka) Ward as a father figure and grandfather to their children. He also inherited a daughter Teria Lloyd Brown and a granddaughter, Elaysha Brown through marriage. Amen was preceded in death by his mother; Lucille Lee and father; Frank Perkins; paternal and maternal grandparents; a granddaughter; Coutori Milan Ward; and his brother; Paul Belton. He leaves to cherish his memories his wife, Marion Pickett-El; five sisters, Lottie Bolden of Paterson, New Jersey, Alchene O'Neal-Jones of Hamlett, North Carolina, Pat O'Neal of Marion, Ohio, Valerie O'Neal of Perth Amboy, New Jersey, and Peggy Thompson (Anthony) of Montclair, New Jersey; three brothers, Gregory Kelly (Maggie) of Paterson, New Jersey, John O'Neal of Hamlett, North Carolina, and Michael O'Neal of Paterson, New Jersey; one uncle, Calvin Lee of Camden, South Carolina; one aunt, Mildred Parrish of New Rochelle, New York; a noteworthy niece, Yvonne Belton of West Palm Beach, Florida and a host of other nieces, nephews and friends.

The family of Amen Al-Azar El created this Life Tributes page to make it easy to share your memories.

Send flowers to the Al-Azar family.